skip to main | skip to sidebar

As I have already mentioned, there is a bus that goes into Porto Polenca (09:45 & 13:30 and another couple of times in the PM that I can't recall) and from there you can get busses to other locations on the island.

You can also walk into Porto Polenca. It takes about an hour to an hour and a half depending on your speed and you follow the road out of Cala San Vicente up past Cala Carbo (see map) which winds up into the mountains (not too steep though). The road gets rougher and rougher - it looks like a herd of Diplodicus have stampeded up there by the 2 foot wide pot holes that are more numerous than bits of remaining road surface - but the locals still drive up to the top at times as there are a few villas up top. At the top of the road you come to a sort of roundabout with a tree in the middle (easily distinguishable on the satelite shot below). Take the second exit which is a walking track that leads up to the high point between the mountains and this becomes a much more rugged trail as it decends the other side into the back roads of Porto Polenca. The track ends at two paths running parallel towards the town. It doesn't matter which you take as each runs either side of a wall and they meet up again in a couple of hundred feet and you get to the road. keep going through the back streets by going in the same general direction you can down the hill side and it should bring you out at the top of Porto Polenca by the Hypermarket - just remember the way you walked if you want to walk back again. The yellow line shows roughly the path of the walk on the satelite picture below. 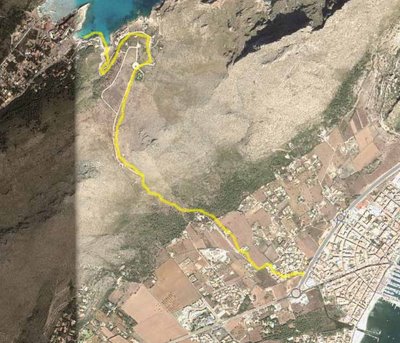 We also hired a car for 5 days to get about. Roads are pretty good and the motorway has been extended almost through to Alcudia even though most maps show it finishing at Inca in the centre of the island. Coming back to Cala San Vicente from the motorway, follow signs off the motorway for Pollenca and when you get to Pollenca go straight across the first roundabout and first exit off the second following signs from Puerto Pollenca. About a mil from the second roundabout is the turn off for Cala San Vicente. We used a local Car Hire on the main road but the first car they gave us smelt like it had been used to transport fish for a month, and then the replacement (although worked fine) had a engine fault light permenantly on which we were told we could ignore. I think next time I'll spend the extra 10 euros and go with Avis via the tour agent who maintain that all their cars are less than 6 months old.
Posted by GreedyGreen

GreedyGreen
United Kingdom
I'm a 50-something, good for nothing, beach bum trapped in the body of mortgage paying office clerk. Socialising with old friends and making new ones is the highest pinnacle of existence.